It is ironic that if I die in Britain my organs will be donated to any person who may be in need of them, as per my expressed permission on my UK driving licence (I ticked the box). In what some may refer to as a "circle of karma", my elder brother is a seasoned blood donor and some of my relatives have benefited from cornea transplants in the USA.

The fact that the UAE along with other Middle Eastern states has yet to introduce an organ donation law – even though the Ministry of Health has been "mulling" doing so for as long as I can remember – is shameful. It should require only a few months to study the law, take it to the Federal National Council (and give them some much required work) and then present it to the country's President to sign in as legislation, should it be acceptable of course.
Until then, Emiratis will continue to travel to places like the Philippines and South Asia to seek organs. The reason for this delay can partly be attributed to the various religious edicts that cast a shadow of doubt on the concept of organ donation. Despite the fact that the Holy Quran is very clear on the value and the sanctity of life as expressed in the Al-Ma'ida Sura of the Holy Scripture: "Whoso saves the life of one, it shall be as if he had saved the life of all mankind" (Chapter 5: Verse 32). Note that the verse highlights the value of human life in general and not just that of Muslims.
Recently, an Omani scholar stated: "Our body is sacred and a dead body is respected in Islam and there's no need to scavenge it for organ donations." The numbers beg to differ with the scholar. In neighbouring Muslim Saudi Arabia, there were 8,500 patients waiting for kidney transplants alone.

These sorts of fatwas lead to confusion in Islamic countries including the UAE, Egypt and Pakistan, where a study found that only 60 per cent of people were willing to donate organs while 73 per cent were willing to receive such donations.
In Israel, a country that, like the UAE, that has mixed feelings about organ donations due to confusing rabbinical edicts, the parents of Ahmad Khatib, a 12-year-old Palestinian boy who was shot dead in Jenin in 2005 by Israeli soldiers, donated his organs for use in Israel. The organs ended up saving the lives of five Israeli children and an elderly woman. This compassionate gesture was praised as remarkable by the occupying power's parliamentary speaker as the organs went to save the lives of Arabs, Jews and Druze.
One of the recipients, also a 12-year-old child from Israel's Arab minority, has been waiting for an organ for five years. "I feel that my son has entered the heart of every Israeli," said Ahmad's father.

The issue with the validity and the enforcement of consensual organ donation is not simply restricted to the developing countries of the Middle East. A study in the British Medical Journal in 2006 showed that 41 per cent of families in the UK blocked the harvesting of organs from patients who, when they were alive, had given written permission for them to be taken.
In fact, Britain has a surprisingly low ratio of organ donations, with only 16 in every one million persons per year donating their organs compared with more than double that ratio in Spain. The problem mostly was the 41 per cent – up from 30 per cent in the 1990s – of families who denied consent after their relative's death, with the ratio rising among the ethnic minorities.

There are several ways that governments can encourage organ donations, according to the UK's Parliamentary Office of Science and Technology, the body in charge of issuing such recommendations. Amongst the POST's suggestions is to follow Spain's Presumed Consent, which means that a deceased person's organs could be taken for transplant unless he or she specifically "opts out"; of course this system can also be coupled with the family's permission.
The most common method is the Opt In system, where people fill in a form that indicates their wish to donate organs after death. Finally, there is the so-called Incentive Scheme, where priority for certain medical treatments is given to patients who are willing to be organdonors.

In June of this year, Mubadala, the Abu Dhabi owned sovereign wealth fund, invested more than Dh340 million ($92.6 million) in a hospital in Kobe, Japan that will specialise in organ transplants and regenerative medicine, where it will send doctors to acquire organtransplant knowledge.
The hospital is due to open in 2010, so let's hope that by the time it is ready the UAE's Ministry of Health will have done mulling and finally drafted the organ donation law. If it hasn't, Mubadala will have to find other uses for these valuable and well trained physicians – or maybe it will just send them to the Philippines.

Article was originally published in The National on Oct 11 2008.

By clicking on the following link I confirm that I will not hold the publisher of this blog responsible for sharing this video.  أقر بأنني لن أحمل صاحب هذه المدونه مسؤولية مشاهدتي الفيديو في هذا الرابط

Rough translation: God Curse Sabah Al Ahmad and curse the blue (Kuwaiti) passport over you. If the Emir of Qatar wants to hand me over to Kuwait he has to (inaudible/"throw me"?) in Qatar, my country, and not send me to Shia dogs (in Kuwait) they are all Shia (in Kuwait)" 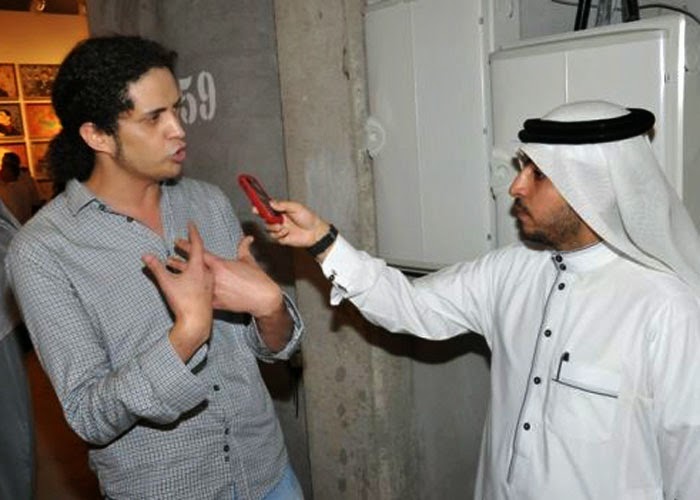 Palestinian poet, curator, writer and artist Ashraf Fayadh has been jailed in Saudi for the past year without trail over blasphemy charges in his latest collection of poems "Instructions Within" and for having "long hair". It seems someone submitted a complaint in 2013 to the Saudi Committee for the Promotion of Virtue and the Prevention of Vice which detained him over a year ago. He has yet to face trial.

I translate a part of his poem "Asylum" from his book "Instructions Within":

Asylum: To stand at the end of a queue..

To be given a morsel of bread.

To stand!: Something your grandfather used to do.. Without knowing the reason why.

The homeland: A card to put in your wallet.

The Photo: Your substitution pending your Return.

And the Return: A mythological creature ... from your grandmother's tales.

2- Interview with his father for France 24: http://goo.gl/MbJBVZ Video

6- In February 2014 100 Arab intellectuals signed a petition for his release http://goo.gl/iqSrjF

8- Report in VICE﻿: The Saudi Arabian Artist in Jail For Having Long Hair http://goo.gl/fkKSOK

I take this opportunity to inform you of a dynamic theatrical initiative, “Home Grown”, launched by my friend Badr Jafar.
This philanthropic program is a joint collaboration between The Middle East Theatre Academy and Kevin Spacey Foundation. “Home Grown” is a rare opportunity for selected youths aged 18-25 from across the Middle East & North Africa to receive a two-week training course by a professional team of actors including the two-time Academy Award Winner Kevin Spacey.
Message from Kevin Spacey: CLICK HERE

The program will take place in Sharjah between the 11th and 25th January 2015, and all participant costs (including flights and transportation) will be borne by the sponsors. The culmination of this program will be a theatrical production by its participants based on an important regional theme, performed in front of an audience on the evening of Sunday 25th of January.
All audition applications must be received online on www.middleeasttheatre.org by 15th December 2014 with further interviews to be conducted afterwards via Skype and where possible in person in the UAE.

Feel free to spread the word amongst your friends, family and peers, and visit their website and various social media sites listed below for further information.
Should you have any further questions, you may contact the Project Coordinator, Alicia White awhite@middleeasttheatre.org or submit your query online at the Middle East Theatre Academy.

Sultan Sooud Al Qassemi is an Op Ed contributor to a variety of publications. His articles have appeared in The National & Gulf News in the UAE as well as Foreign Policy, New York Times, The Guardian, The Independent and the Financial Times.